We are updating our website for mobile devices. Please let us know what you think :)

Edgar Cayce Remedy Karma Cleanse Tonic is made from wild harvested herbs. Many are harvested in Autumn, and we made a fresh batch of our Karma Cleanse.

Just like fine wine, each year the crop is different yet the same. John has tested this new batch on many New Yorkers, and says this batch is Wow!!!

How to Cleanse your Karma

How to cleanse your Karma

Karma Cleanse includes Organic Detoxified Iodine and many other ingredients which have been time tested to detoxify and cleanse the body.
In Chinese Medicine, Karma is related to various body organs such as the  liver, gallbladder, pancreas, kidneys, stomach, and intestines<.

Karma Cleanse detoxifies your organs, releasing stuck Karma from your body.
This will assist in any other Karma Cleansing practice which you may be moving through, including Yoga Karma Cleanse, Ayurveda Karma Cleanse and Taoist Master Sha Karma Cleanse, etc.
In Eastern cultures, ancestral weaknesses are carried over in the body organs.
Cleansing your Karma is a practice of cleansing one's body, mind, soul, & spirit.

On the 6th day of September, 1924, Edgar Cayce gave a reading for a male adult who was dealing with an advanced sarcoma, which the reading classified as a bacilli in the blood. Along with recommending the Abrams machine to produce the resonant bacilli frequency, or counter frequency if you will,  Edgar Cayce suggested the use of an herbal tincture blend as a blood cleanser.

Not far from Dayton, across the Indiana state line, lived a boisterous young man by the name of Harry Hoxsey. When Harry heard about this herbal blend he decided that someone should secure these ingredients and test out the concoction to see just how good of a blood cleanser it was. After all, if it worked for 4695, then it only stood to reason that it should work for others. As this was Harry's idea, he decided that he would be that person, and that is what he did. Keep in mind back then the term cancer was rarely mentioned, not because cellular malignancy had a different label, but rather because cancer was not that common. Anyway, Harry's motivation was two-fold. He would heal the sick of this devastating and incurable disease, and along with that become rich and famous.

For the next 25 years Harry would travel the countryside touting his miraculous blood cleanser which imparted unparalleled success. As the global incidence of cancer continued to rise, so did Harry's notoriety.  (note: this was back in the early half of the 1900's)

Ultimately Harry drew unto him a number of detractors. Some were envious of his astounding cure rate while others simply 'wanted a piece of the action. But Harry's secret formula was closely guarded and he cleverly masked it's original inception with an elaborate story of how the ingredients "were originally passed down to him by his grandfather. The story went something to the effect that his grandfather, who was a veterinarian, observed one of his horses, which happened to have a cancerous condition, and what the horse happened to be eating in the pasture. Notes were taken, and when the horse cured itself, the formula was derived. Of course logically, there's no way all of these herbs would have been growing in a single pasture, not to mention the illusive iodine herb, but most people, on up to today, believed Harry's story. It was something about an animal's intuitive ability for self-preservation that really stuck.

The Hoxsey clinic in Tijuana was the first American cancer treatment center in Mexico. Forty years later it remains it's most successful. Thousands of people recovered from cancer during Harry's stint in Dallas, and tens of thousands more have sought refuge from the standard medical paradigm since that time by crossing over the border. Considering the present scope of the problem this is a mere drop in the bucket.

The Abrams machine has long gone out of production, but as Harry Hoxsey continues to demonstrate from his grave, the Cayce blood cleanser is, and can continue to be and effective tonic for alleviating the root cause of malignant cellular activity: blood toxicity. Individuals could start percolating this relatively simple herbal blend which could then be dispensed to those in either a predisposition (marker) state, or a cancerous state. If enough people benefited from it a homegrown industry could eventually replace the allopathic model. Conceivably this single idea could derail the trillion dollar cancer treatment industry, not only salvaging the health and well being of millions of people but potentially avoiding an almost certain economic collapse which will likely precipitate from the present belief system. Perhaps even more important, if a grass roots movement of this kind actually did demonstrate it's viability, no doubt it would become a model for addressing other health/ illness issues, as well as pave the way for future political, economic, and social reform. As I see it we're at the crossroads. We can either get our butts off the couch and into the lab, or we can have them handed to us in a sling. Of course there's always the option of the gazillionaire who is going to finance a facility to put this idea back in motion, but I don't think I want to wait around for that to happen. What's say we move this party forward and get on with the process of evolution.

About Karma Cleanse and about Edgar Cayce's and Dr. Oz's recommendations on beet juice

Edgar Cayce readings have 113+ references to beet sugar or beet juice, where the pancreas, kidneys and digestive organs were uncoordinated or out of balance.

In our Karma Cleanse, we have found one of the highest quality beet sugar syrup made of concentated beet juice imported from Germany.
According to Dr. Oz, beet juice has been found to have many health benefits, especially for detoxifying the liver. 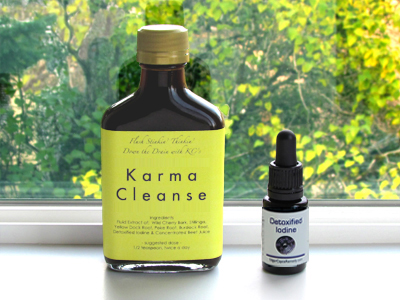 Save by buying Karma Cleanse for  all in one bottle supplement.
Edgar Cayce selected these ingredients in his famous Cayce Blood Cleanser - Karma Cleanse which have been used for decades for tonifying and cleansing:

Root Karma Cleanse is here in 2019 by Customer Request!!!

Menopause and Metabolism
As we age the metabolism slows down, so you need to get out and exercise more, eat more fruits and vegetables, get off sugar (for the most part), and yes, pump up the thyroids with the iodine (which has a lot to do with metabolism).
The thyroid gland needs iodine to generate hormones which are responsible for regulation of: 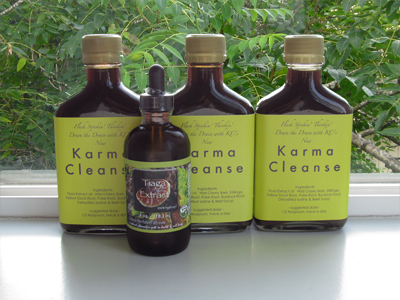 Tiaga Extract Tincture is made with alcohol, in the European traditional roots of Herbal tincture making.

For people who can take alcohol, our Tiaga Extract Tincture is a preferred option, as the alcohol acts as a preservative, therfore the shelf life is the same as with other alcohol based tinctures.

We offer our 3 packs of Karma Cleanse with your choice of Tiaga Extract, Tiaga et Quattro Tincture

Tiaga Extract, is alcohol free for those who cannot have alcohol based tinctures.

The Tiaga et Quattro, an alcohol based tincture is a blend Tiaga with 3 additional medicinal mushrooms including:

Synonyms: Virginian prune, black cherry, black choke, choke cherry, rum cherry
Cayce Quotes on Wild Cherry Bark
Cayce Quotes on Wild Cherry Bark
1012-1 . . . The first ingredient, the Wild Cherry Bark, is a direct activative force upon the pneumogastrics and the pulmonary system.
643-1 . . . Wild cherry bark is an expectorant and a purifier as combined especially with other ingredients for the blood supply.
808-3 . . . The taking of those properties indicated for the allaying of cold and congestion - as in the cherry, the horehound - will not only aid digestion but stimulate the circulation for the upper portion of the head and through the bronchial area, thus giving a better flow of circulation for the throat and the gums...
2790-1 . . . The active principle from the wild cherry bark, with the other ingredients, is a stimulation to the lungs, throat and bronchials, and those organs above the diaphragm.
5653-1 . . . To this we would add Wild Cherry Bark (this is to act as an active force with the gastric juices of the stomach, as well as a carrier for the rest of the system, acting with the respiratory system)
457-3 . . . The Wild Cherry Bark is for cleansing the blood supply.
3724-1 . . . The action of these properties combined within the system are to act on the effects acquired in the lung forces within clarifying blood. The action of certain properties is to rebuild the Hemoglobin within the blood to give more Leukocytes to the blood, as we find in the bark of Wild Cherry and Sarsaparilla.
5681-1 . . . Wild Cherry Bark (Preferable that taken from the North side of the tree) ... 4 ounces
top

Now, we find, we have given very specifically as to how these medicinal properties should be prepared. We would prepare the sage tea first, while warm, sufficient to easily dissolve the beet sugar, and only use beet sugar. This should be prepared in the medicinal properties, then adding Ambergris dissolved in the alcohol, then adding the Gin (Gordon's dry), then adding the Cinnamon. These properties taken in this manner with the system, the sage becomes the sedative, and an active principle with the gastric juices and an incentive to the emunctories in liver, and with the sediments from the Ambergris as stimulated by the alcohol, and beet sugar, will give the action necessary to the pancreas and duodenum to receive the incentive for their functioning. This we find in the sugar properties, with the mixture in the system, does not become the active principle as that in cane sugar. Hence the beet or vegetable.

To one gallon of rain water, add eight (8) ounces of common Garden Sage. Reduce by simmering to one quart, while warm add: The dose would be two (2) teaspoonfuls half an hour before each meal. Do that, and we will find this: The sage as a sedative to the intestinal tract, especially in the action of the pancrean and gall duct forces over the body; the gin as the stimulation to the kidneys in their action in eliminating; the sugar, Beet sugar with Ambergris as the force necessary to create that which will produce the healing forces to the intestinal lining, as it were, itself. Do that.
top

Prepare these as medicinal properties, to give the correct vibration to the system, to correct the inflow - as it were - of that overtaxed energy to the kidney from the pancrean condition:

Shake solution together before the dose is taken, which should be teaspoonful four (4) times each day, half an hour before meals, half and hour before retiring.

(Q) Has the body diabetes?
(A) A touch of same, yes. This was indicated by the condition in the kidneys - also the digestion - though not in a virulent form at present. The relief of the condition - as is seen through the properties as taken - will overcome these conditions.

Known for decades as a liver-protective food, beets may not be the newest kid on the superfood block, but mounting research is showing why you should take another good look at this root vegetable in juiced form.

Many of our patients have mentioned that juicing beets will give them more energy for their day. Research is showing that this may be due to the ability of components in the juice to improve blood flow. Beetroot juice has been shown to help the body respond better to exercise, by balancing oxygen use and increasing stamina.