We are updating our website for mobile devices. Please let us know what you think :)

We continue to make our iodine in small batches to assure quality and adherance to Edgar Cayce's original iodine recipe.

Iodine is the one trace mineral that can help protect the thyroid from radiation. The thyroid gland is the principle user of iodine in the body.

Detoxified Iodine is an antimicrobial that can alleviate

Our Iodine NOT from Japan
Unlike commercially available products, which use iodine bonded with chlorine, we use only naturally occurring iodine derived from natural sources, as was specified in the Edgar Cayce readings. This pure crystalline iodine is then reduced to a 1% concentration in 100% ethyl alcohol and electro-magnetically transmuted (while being suspended in a wet bath containing a mild acid solution) into the Atomic state.
Our source of crystalline iodine is pure (unlike iodine derived from seaweed which may contain mercury) This is the form which Edgar Cayce suggested the body could recognize and fully assimilate, and indeed was his primary contribution to the concept. From there it is bottled in 16 ml amber European glass bottles with a premium sturdy thick tamper evident glass dropper. You don't have to take shot-glasses full of standard Iodine to get improvement.
Just take drops of Detoxified Iodine and see the result. You get 200 mcg of Iodine absorbed into your body for every drop you take. 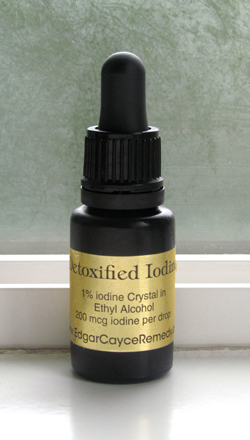 Thanks so much for your great product!
Alan Weisman 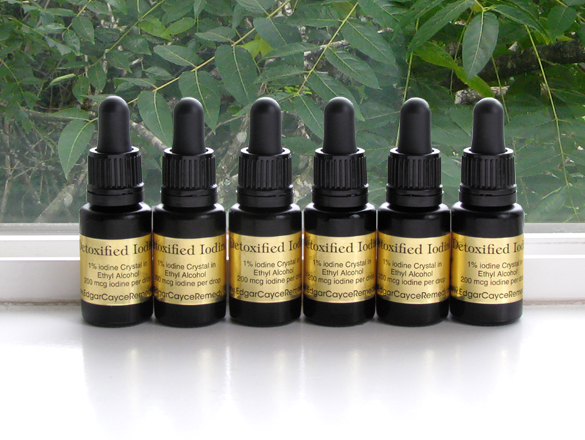 Wow!! Your products look amazing! I was looking for a good source of iodine when I stumbled upon your site. Now I feel the need to educate myself on the benefits of all your products. Can't wait to try this iodine.
Spring 2013 ~ Kristy : ) 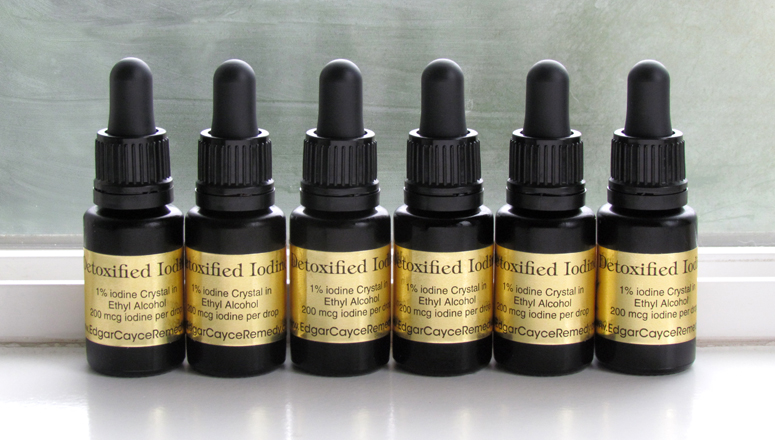 Came back from a shoot in Chernobyl recently and do not eat any seafood, so have a feeling this might just be what the doctor ordered
Film producers - South Africa ~ Uga Carlini

The RDA for iodine is sufficient to ensure normal thyroid function. There is presently no evidence that iodine intakes higher than the RDA are beneficial. Given the importance of sufficient iodine during fetal development and infancy, pregnant and breast-feeding women should consider taking a supplement that provides 150 mcg/day of iodine.

Amiodarone, a medication used to prevent abnormal heart rhythms, contains high levels of iodine and may affect thyroid function. Medications used to treat hyperthyroidism, such as propylthiouracil (PTU) and methimazole, may increase the risk of hypothyroidism. Additionally, the use of lithium in combination with pharmacologic doses of potassium iodide may result in hypothyroidism. Further, the use of pharmacologic doses of potassium iodide may decrease the anticoagulant effect of warfarin (coumarin).

Some foods contain substances that interfere with iodine utilization or thyroid hormone production;
these substances are called goitrogens. Some species of millet and cruciferous vegetables (for example, cabbage, broccoli, cauliflower, and Brussels sprouts) also contain goitrogens. Further, the soybean isoflavones, genistein and daidzein, have been found to inhibit thyroid hormone synthesis. Most of these goitrogens are not of clinical importance unless they are consumed in large amounts or there is coexisting iodine deficiency. Recent findings also indicate that tobacco smoking may be associated with an increased risk of goiter...

Individuals at risk for iodine deficiency:

Vegetarian and non-vegetarian diets that exclude iodized salt, fish, and seaweed have been found to contain very little iodine.

The increased iodine trapping activity of the thyroid gland in iodine deficiency results in increased thyroid accumulation of radioactive iodine. Thus, iodine-deficient individuals are at increased risk of developing radiation-induced thyroid cancer because they will accumulate greater amounts of radioactive iodine. ... administered in pharmacologic doses (50-100 mg for adults) within 48 hours before or eight hours after radiation exposure from a nuclear reactor accident can significantly reduce thyroid uptake of 131I and decrease the risk of radiation-induced thyroid cancer. The prompt and widespread use of in Poland after the 1986 Chernobyl nuclear reactor accident may explain the lack of a significant increase in childhood thyroid cancer in Poland compared to fallout areas where  iodine was not widely used. In the U.S., the Nuclear Regulatory Commission (NRC) requires that consideration be given to potassium iodide as a protective measure for the general public in the case of a major release of radioactivity from a nuclear power plant.

An uncontrolled study of 233 women with fibrocystic breast condition found that treatment with aqueous molecular iodine (I2) at a dose of 0.08 mg of I2/kg of body weight daily over six to 18 months was associated with improvement in pain and other symptoms in over 70% of those treated. About 10% of the study participants reported side effects that were described by the investigators as minor. A double-blind, placebo-controlled trial of aqueous molecular iodine (0.07-0.09 mg of I2/kg of body weight daily for six months) in 56 women with fibrocystic breast condition found that 65% of the women taking molecular iodine reported improvement compared to 33% of those taking the placebo. More recently, a double-blind, placebo-controlled, clinical trial in 111 women with documented breast pain reported that molecular iodine (3 mg/day or 6 mg/day) for five months improved overall pain. In this study, more than half of the women receiving the highest dosage of molecular iodine reported a ≥ 50% reduction in self-assessed breast pain compared to 8.3% in those receiving placebo. Large-scale, controlled clinical trials are needed to determine the therapeutic value of molecular iodine in fibrocystic breast condition. The doses of iodine used in these studies (3 to 7 mg/day for a 60 kg person) are several times higher than the tolerable upper level of intake (see chart above) recommended by the Food and Nutrition Board (FNB) of the Institute of Medicine and should only be used under medical supervision.

Edgar Cayce's Original Recipe for Liquid Iodine from his readings

Unlike commercially available products, which use iodine bonded with chlorine, we use only naturally occurring iodine derived from deep inside the earth, protected from current day environmental toxins. This pure crystalline iodine is then reduced to a 1% concentration in 100% ethyl alcohol and electro-magnetically transmuted (while being suspended in a wet bath containing a mild acid solution) into the Atomic state. This is the form which Edgar Cayce suggested the body could recognize and fully assimilate, and indeed was his primary contribution to the concept. From there it is bottled in 1/2 oz. (amber) dropper bottles and unless otherwise indicated, labeled and sealed with a full bottle heat shrink.

It has been written that the fundamental building blocks to health are Of these, iodine seems to be the least understood and most neglected. Detoxified Iodine is very important for absorbability into the body's system. Detoxified Iodine, through a proprietary process, accomplishes this critical process making this formulation 99 percent bio-available into the bloodstream. Its main function is to provide the necessary element for the thyroid gland, which is the center of the immune system in the human body. The thyroid influences all of the glands in the body, which regulates all the other systems directly. When the thyroid is operating correctly, the WILL is restored and vitality returns. Many long standing health conditions may improve or completely reverse when iodine is properly supplied in the body.

Edgar Cayce, in his immutable grasp of the situation recognized that iodine deficiency was far beyond the scope of addressing goiter, even though it was quite prevalent at the time. In sufficient amounts in a detoxified form the iodine vibration could not only adjust a dysfunctional thyroid, it could assist with a host of glandular imbalances as well as a wide assortment of internal as well as external bacteria, fungi, and virus's. The list is so extensive that the readings refer to the product name (Atomidine) more than 4,400 times during the course of his overall discourse.

These numbers alone reveal it as a core constituent to his discussion of health and illness. Once again it is absolutely essential that a naturally occurring iodine be utilized in making the product. This is a powerful element and when it's misused or abused it has a powerfully bad effect on the body. The other thing to keep in mind is that Edgar Cayce suggested it would still be necessary to electrically charge the iodine, and thereby render it into a state the body could recognize, prior to oral consumption. I could talk a lot about this concept and how it's changed people's lives but that's not my style. Besides, it's not about me. I will say this though; iodine is the one thing that can protect the thyroids from radiation. The rest of it you'll figure out once you get into it.

Two-thirds of the body's store of iodine is located in the thyroid gland. The cause of thyroid goiter is lack of sufficient iodine in the soil and drinking water or from inability to utilize iodine.  In the thyroid gland, Iodine is converted to Iodide by oxidation. (according to Kaplan Physiology notes).
This makes Iodine the precursor to iodide.

It is important to note that the body assimilates the precursor (iodine) and the thyroid makes the iodne - when it is processed in this fashion, the body assimiates it in the proper way. NIH studies show that taking iodide directly causes harmful side effects.

The average iodine intake of a normal adult on an ordinary diet in a non-goiter region is about 0.03 milligrams, a day. This tiny amount is only about one-seventh of what is needed for daily thyroid hormone production, but the body practices great economy and re-uses much of its iodine store repeatedly in producing hormone secretions. In goiter regions, not even the 0.03 milligram per day is available in the food and water. Goiter regions are to be found all over the world. No continent is free of them. Generally they are the mountainous and inland areas of the globe.
Detoxified Iodine protects the thyroid gland from toxic radioactivity in the environment. (see above) Created according to Edgar Cayce specifications, it can also be used topically and added to water as a disinfectant. You can use in your pets' water as well.
Additionally, iodine is an endocrine stimulatory element and will up-regulate the entire glandular system, the stomach, intestines, colon, skin, vaginal secretions, etc. This is a normal detoxification mechanism and can be sped up by taking hot Epson salt baths with dry brushing and massage. (Far Infrared Sauna sweating is good too to assist in detoxification.)
top

Detoxified Iodine comes in a 16 ml bottle with a thicker more sturdy dropper than the other bottles on the market. This is a 1 month to 6-1/2 week supply depending on how many drops per day you are taking. The old 1/2 oz bottles lasted 4 to 6 weeks, but this bottle is larger. (Remember, if you are also taking Karma Cleanse, adjust your Iodine intake accordingly. Karma Cleanse contains 4 drops of Iodine per dose.